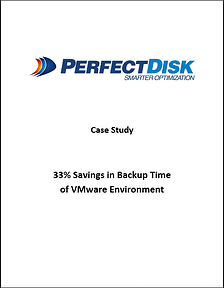 The Town of Castle Rock, Colorado's IT team has a mandate to do weekly full system backups of its 7+ terabytes of data. The team uses a state-of-the-art CommVault enterprise backup platform that has 4 drives totaling 10TB of storage. Due to the town’s backup retention requirements, the backups are done in a disk-to-disk-to-tape sequence.

The problem was that the backups were taking over 72 hours to complete, with a negative impact on system performance and user response time. With backup times this long, there was no margin for error in the backup process; the IT staff could not afford restarts. Furthermore, as data volume increased, the problem was only going to get worse.

“After all the tweaking of the hardware, it was the Windows file system that was killing us. PerfectDisk now keeps everything organized and I/O rates are much better. I would say it was an investment that helps us get the most from our hardware and our virtual environment.”

The IT staff looked at all the usual areas that are considered when I/O issues arise. The backup system was tweaked and optimized according to specifications. The network, always a suspect when bottlenecks are an issue, was analyzed and adjustments were made. There were meetings with HP to troubleshoot the disk drives; and while all of these adjustments did provide some improvement, it just wasn’t enough. Despite all the team’s efforts, backups that were starting at 5pm on Friday were still completing on Monday or Tuesday. Something had to be done.