Treating The Root Cause of Disk Latency in Virtualized Systems 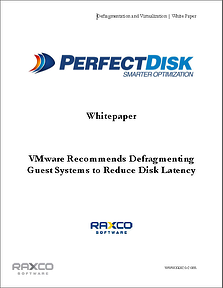 Disk latency and I/O contention are the Achilles heels of virtualized systems. Due to a lack of understanding of the root cause of disk latency, many debate or are completely unaware of the need to defragment virtualized systems but VMware has finally put an end to that debate.

In the VMware vSphere 5.1 Documentation Center, VMware recommends defragmenting the guest file system as the second step (of 12) that should be taken to remedy disk performance problems.

Even Storage I/O Control (SIOC) cannot thoroughly alleviate the disk latency problem. SIOC improves latency by throttling throughput1. However, placing limitations on the HBA-LUN queues treats the symptoms of latency but not the root cause.

This paper looks in detail at disk latency in VMware systems and outlines how disk defragmentation and free space consolidation in guest systems reduce disk latency, per VMware's recommendation.